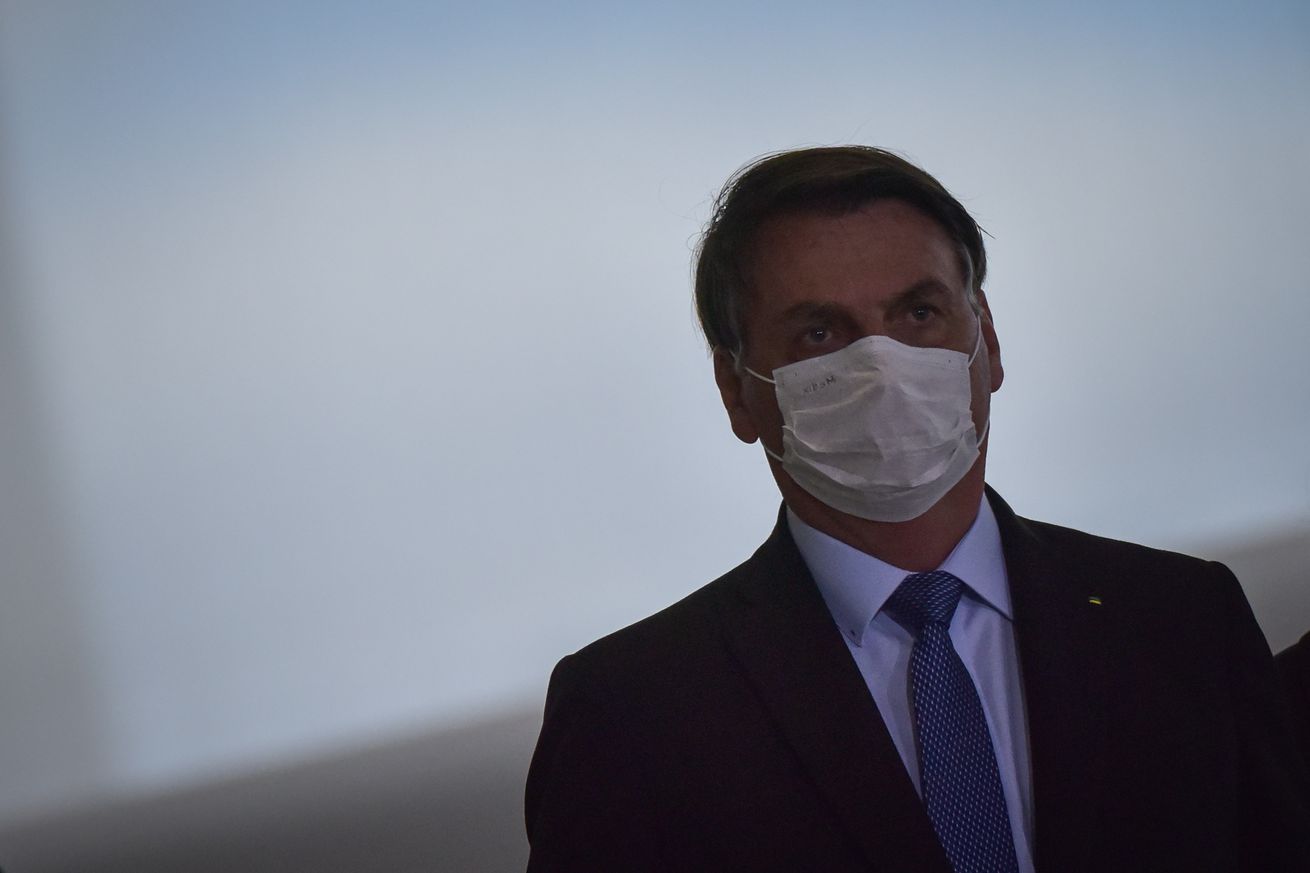 Brazil’s President Jair Bolsonaro at the Planalto Palace in Brasília, Brazil, on June 30, 2020.  | Photo by Andre Borges/NurPhoto via Getty Images

Brazilian President Jair Bolsonaro tested positive for COVID-19, he announced today. He is 65 years old. Over the weekend, he attended a US Independence Day event with US Ambassador Todd Chapman, who did not wear a mask.

Like US President Donald Trump, Bolsonaro has downplayed the risks and extent of the COIVD-19 pandemic and said that the danger was over-exaggerated by the media. Brazil has the second-worst outbreak in the world, behind the United States.

Bolsonaro said he’s taking hydroxychloroquine, even though clinical trials show that the drug does not work for patients with COVID-19. Like Trump, he’s promoted the drug as a cure despite the lack of evidence.

Intro Hi everyone, welcome to the January 6th, 2019 episode of the aRTy News podcast, brought to you by Raymond Tec. Happy New Year! For those of you listening for the first time, I scour the web every week for tech news and curate the articles, tweets, and backchannel sources to provide you, the non-nerd, […]

Intro Hi everyone, welcome to the January 6th, 2019 episode of the aRTy News podcast, brought to you by Raymond Tec. Happy New Year! For those of you listening for the first time, I scour the web every week for tech news and curate the articles, tweets, and backchannel sources to provide you, the non-nerd, […]

When two men were hired to break into Iowa judicial buildings, they thought it was just another phys

For months, German V-1s terrorized the city. To take them down, US physicists had to develop a “smar

TikTok and the Evolution of Digital Blackface
4 August 2020

On the app, users drape themselves in the trappings of Black culture—and steal the viral spotlight.

DNA tests are cheap and ubiquitous. For some donor-conceived people, they can unearth long-buried tr

If, through some scientific malfunction, you found yourself transported 70 million years into the pa

Windows 10 comes with Microsoft Photos app and Windows Photo Viewer has been retired, but you can re

Windows 10 is packed with useful settings that can improve your experience, but there are many featu

Multiple Reddit subreddits have been defaced during the last 24 hours, with the attackers behind thi

Zack Snyder is the gift who keeps on giving, unveiling the villain's spikier look from his vers

Weirdly, the little Ioniq hatchback we know and love isn't invited to come along.

Commentary: "I, for one, welcome our new insect overlords."

The Microsoft co-founder estimates the disease will affect the developing world even longer.

Regularly $10 a month, you're saving 50% on unlimited access to thousands of ebooks, magazines

Digital Clones Could Cause Problems for Identity Systems
8 August 2020

Three fundamental technologies -- chatbots, audio fakes, and deepfake videos -- have improved to the

The attack has defaced the channels with images and content supporting Donald Trump.

Hacking the PLC via Its Engineering Software
7 August 2020

Researcher will demonstrate at DEF CON an emerging threat to industrial control networks.

Building successful macro attacks means getting past several layers of security, but a Black Hat spe

A series of business email compromise campaigns has been targeting executives of more than 1,000 com

Getting to the Root: How Researchers Identify Zero-Days in the Wild
7 August 2020

Security is primarily your responsibility – with help from the cloud provider.

Make It So: Accelerating the Enterprise with Intent-Based Network Security
13 June 2020

How organizations can realize the benefits of intent-based networking across their hybrid networks.

In the U.S and global communities, election security is a large concern.

Google is on track to resume the roll-out of stable Chrome releases next week, but says it will skip

A total of 60 deals were made during the quarter, down from the last four-quarter average of 87 deal

With apologies to the Carpenters​, Samsung executive Federico Casalegno was practically singing,

He had AppleCare. Then Apple sent his broken iMac to Best Buy
9 August 2020

Apple is widening its network of authorized repair centers. A famous photographer isn't happy a

The block was put in place at the end of July and is enforced via China's Great Firewall.

People do strange things in doorways: Density watches the office as employees come back
8 August 2020

Companies are sending some workers back to their cubicles and to the factory floor. San Francisco st

This Apple product used to be terrible, but I now highly recommend it
8 August 2020

Cloud IAM and the Path Toward Digital Transformation
7 August 2020

By 2022, 40% of global midsize and larger organizations will use identity and access management (IAM

User risk management watches where people can’t. If you polled a random sampling of employees at var

Shellshock In-Depth: Why This Old Vulnerability Won’t Go Away
6 August 2020

As employees increasingly work remotely, it is more important than ever to maintain visibility and t

Security Modernization for the Cloud
6 August 2020

This is the first in a blog series that will focus on all phases of security delivery: design, dev/b

The oil and gas industry is one of the most powerful financial sectors in the world, critical to glo

What’s it like to measure and optimize global security operations centers (SOCs)? Measuring a SOC is

A ransomware infection can have a significant financial impact on an organization. American digital

Human history is full of examples of encryption playing pivotal roles in war, competition and transi

The United States has fired a new salvo in its rivalry with China, ordering sweeping restrictions ag

Integration is Key to Bringing Security Teams, Processes and Technology Together read more

One of the largest owners of shopping mall real estate in the United Stages, Simon Property Group, h

Apple goes to war with the gaming industry
9 August 2020

TikTok, the video-sharing app that’s moved to the center of the economic conflict between the US and

The first season of “The Umbrella Academy” had its flaws, but empathetic portrayals of its seven sup

Welcome back to The TechCrunch Exchange, a weekly startups-and-markets newsletter for your weekend e

Moft is a clever company that makes clever products. For a while there, I was sporting their laptop

They say business needs certainty to succeed, but new tech startups are still getting funded aggress

For much of this year, IT professionals all over the globe have had their hands full, finding ways t

Many companies today have developed a Cybersecurity Incident Response (IR) plan. It's a sound s

17-Year-Old 'Mastermind', 2 Others Behind the Biggest Twitter Hack Arrested
1 August 2020

In this episode of the podcast (#187), sponsored by Virsec, we talk with journalist and author Cory

In this Spotlight podcast* we’re joined by Andrew Jaquith, the CISO at QOMPLX to talk about how the

In this Spotlight podcast* we're joined by Jason Fruge, the VP of Business Application Cybersec

The US economy hasn’t simply allowed tech giants to ignore the social harms of their platforms; it h

Microsoft is rumored to be unveiling its second, cheaper next-gen Xbox console this month, and it lo

Toshiba is officially out of the laptop business
9 August 2020

Toshiba quietly exited the laptop business once and for all last week, ending a 35-year run by trans

Computer scientist Frances Allen, known for her work on compiling, dies at 88
9 August 2020

IBM Frances Allen, whose work on computer compiling helped establish a foundation for much of modern

WIRED Tested. These are our favorite portable Bluetooth speakers of all shapes and sizes, from water

If you don't have AC at home, or are stuck in the heat outdoors, we have tips and gear for you.

What If the Big Bang Was Actually a Big Bounce?
9 August 2020

New computer simulations model an alternate way of thinking about the cosmos: as a cyclic universe t

You don't have to stay inside Google and Apple's walled gardens. But if you choose to vent

Flaws Could Have Exposed Cryptocurrency Exchanges to Hackers
9 August 2020

Not only is the app many Americans' primary means of communicating with China, it's also b

Do you need a small, cheap way to improve your life? These are the affordable pick-me-ups that we ca

Plus: A Canon ransomware hack, a nasty Twitter bug, and more of the week's top security news.

Just like with AirDrop on Apple devices, you're now able to send almost anything to your contac